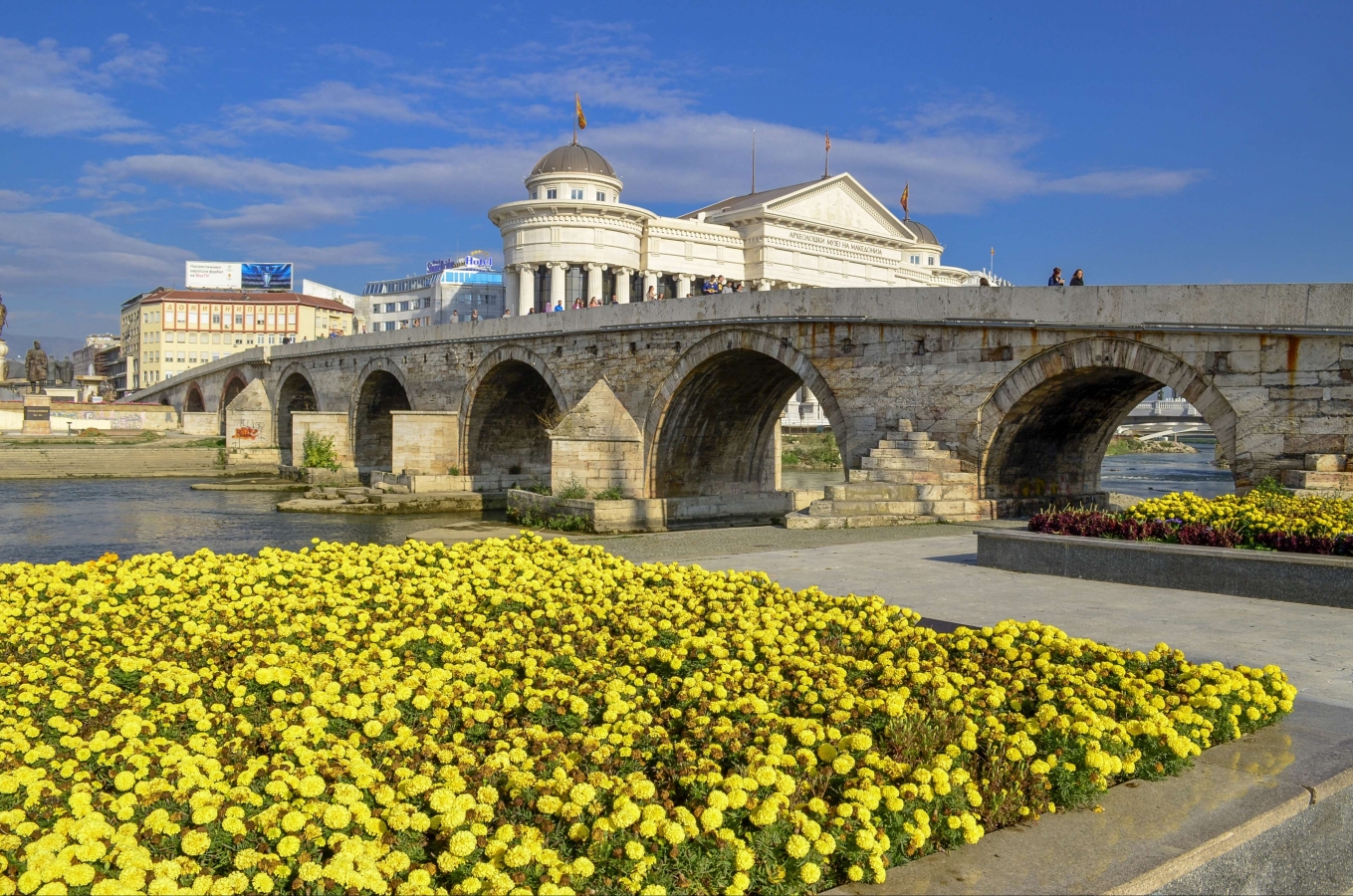 Birthplace of Mother Teresa, location of the Kale Fortress, and capital of North Macedonia, Skopje is North Macedonia's largest city and it has a rich history. Through the heart of the city flows the Vardar river, with the more historical buildings on one bank and the modern buildings on the other. The Stone Bridge, originally built in the 15th century, connects these two halves of the center together. Skopje has a warm temperate climate. It is populated by a variety of museums, archaeological sites, and other places of interest.

Skopje’s history begins more than 7000 years ago when the first Neolithic farmers settled here. The first well documented settlement of Skopje was by the Paionians, which was then invaded by Dardanians (3rd century BCE). The Dardanians built the settlement up into a town and made it their capital “Scupi”. Initially resisting Roman conquest, Scupi fell to the Roman’s in 28 BCE. The native population remained and it went from being a Roman military base to a colonial seat of government. Scupi flourished under Roman rule until it’s split, when it became part of the Byzantine Empire/ Eastern Roman Empire. In 518 the city was destroyed by a massive earthquake, likely the biggest it’s experienced. Eventually the Byzantine emperor Justinian I rebuilt the city in a nearby location that was more strategic, on and around the hill where he built the Kale Fortress. Slavic sacking quickly reversed some of this progress, and Scupi was left deserted for a few centuries. In the 830s CE Skopje became part of the First Bulgarian Empire and was even the Bulgarian Empire’s capital from 972-992 CE. In 1004, in the face of pressure from the Byzantine empire,the Bulgarian governor of Skopje, Roman, surrendered it to Byzantine Emperor Basil II in exchange for the titles of patrician and strategos. With short interruptions the Byzantine Empire ruled the city until 1203, when in the face of the empires decline the Bulgarian emperor Kaloyan reclaimed it as their own.

The next two centuries were turbulent, Skopje switched between Bulgarian, Byzantine, and Serbian rule. In 1346 the Serbian king Stefan Dushan was crowned here as the first Serbian emperor. The city became part of the Ottoman empire in 1392. Skopje grew and prospered beneath Ottoman rule until The Great Turkish war when the Austrians seized the city. General Silvio Piccolomini of the Austrian army set Skopje on fire, supposedly to cleanse it of a cholera epidemic, and it burned for two days, leaving Skopje devastated. Official buildings were rebuilt but the city remained in decline until 1850 when it began to slowly grow in population once more. Skopje remained as part of the Ottoman Empire until 1912 when Serbian forces seized the city as part of the Balkan Wars. During WW1 and WW2 the city twice became part of Bulgaria, then in 1945 turned into the capital of Socialist Republic of Macedonia under the Federation of Yugoslavia. In 1963, Skopje was hit by an earthquake that destroyed 80% of the city and left 70% of the population without shelter. The city has been rebuilt with more space between its buildings, to reduce future impacts from earthquakes. Macedonia remained a socialist nation until 1991, when it peacefully seceded from Yugoslavia. In 2019 the country officially adopted the title “The Republic of North Macedonia”.

Field Schools that Visit this City: